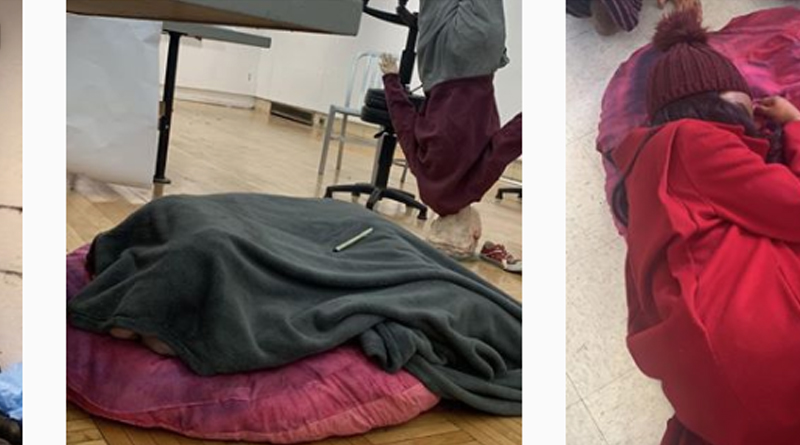 This blog text is excerpted from a paper presented at the “Yoga bodies and the transformation of the self” panel of the Association of Social Anthropology at Oxford University in September 2018, and addresses the privileging of the mind over the body in an academic setting in a way that can be not only physically but also creatively destructive to students. I take my experience with art history students at the Rhode Island School of Design as a case study.

Where does the intellect reside?

Most scholars and philosophers interested in somatic wisdom locate Descartes’ Fourth Discourse as a crux point for the hierarchization of mind over body. The Cartesian designation of the brain as the “organ of the intellect”has continued to impact both European and American constructions of intelligence in an ironically unreflexive way, “Descartes has left us with a theory of mind and thought so influential that its main tenets are widely held and have barely begun to be re-evaluated. It has been handed down from generation to generation as if it were a collection of self-evident truths. Much of it is still taught with reverence.” (Lakoff and Johnson, 1999) As Professor of Education Guy Claxton points out, this Cartesian mind/body split influences not only personal understandings of self, but can shape professional practice. He cites the example in which legal and political proceedings claim to respect only rational argument based on objective evidence, wherein speech that may come “from the heart,” — which is to say the body — “…has had no formal place in such proceedings, and is often treated as embarrassing.” (Claxton, 274)

In the life of the mind, how do we treat our bodies?

This said, methodological shifts emergent from post-colonial and feminist practices, such as affect theory and more recent turns in trauma studies have made room for modes of interpretation that point to the body as the site through which we are continually constituted, and the lens through which our experience is filtered. (Powell, 2014, Grosz, 1994) Scholars like queer theorist Sarah Ahmed notes the way in which not only the visible, but the interior workings of the body, such as our emotions, carry cultural and political meanings in ways that help to establish the borders of our subjectivities (Ahmed, 2004). In gender studies and queer theory, much work elucidates the body as site for both social inscription in and resistanceto power dynamics, and increasingly often the literature ventures into the physical consequence of living in such bodies. Until quite recently little is said about the embodied implications of actually performing intellectual labor. In the life of the mind, how do we treat our bodies? What intelligence do our bodies have to contribute?

My own experience finishing graduate school under perceived pressures of time and distance, with increasingly chronic physical challenges exacerbated by sitting at a desk for up to fourteen hours a day, led me to rehab my body and my relationship to intellectual work through immersive yoga, bodywork, and meditation trainings. Having returned to academia, it’s now my work to educate and do my own research in a way that takes the integration of mind and body not just a given, but a gift.

Rhode Island School of Design is an institution known for its rigor and intensity in developing highly skilled artists and designers, a curious place for me to have ended up after my adopted attitude of what we refer to in craniosacral work as “minimum effective pressure.” My first-year students are often excited, curious, devoted, and exhausted. They routinely fall asleep in class, (and not because I’m dull), or take supplements to stay awake. There is a RISD instagram feed called RISD_asleep in which students caught sleeping around campus (literally) are captured and published — in 2017 one of my first-years was photographed eight times by the end of the first term. It is simultaneous public humiliation and pride — like hazing — that absolutely negatively impacts their cognitive and creative capacities. (Patrick, 2017) At eighteen, many of them have chronic back, neck, and shoulder pain, and they commiserate over their endurances like badges of honor. Recognizing this pattern as having been destructive in my own life, I now teach art history from an embodied feminist perspective in the hopes of delivering theoretical and historical material, exploring different avenues of creative thought, as well as encouraging self-care practices among my students — from theory into praxis into practice.

In the last two years I’ve been able to refine two courses that address the body as epistemological subject and site, while making use of mindfulness and somatic practices to orient my students. One such course is a twentieth century art class that looks at constructed “revolutionary” moments in art history, both socio-political and aesthetic, with the specific focus of understanding the body as carrier of meaning. Tracking the Modernist movement away from illusionistic representation so privileged in the Renaissance towards the insistence on the materiality of the artwork — a shift that has potential to mirror the Cartesian mind/body dualistic hierarchy of abstract and eternal over base component. It is also fertile ground to discuss the ways even in so-called “revolutionary” moments the very structures of power that are allegedly being undermined are reinstantiated, say through Greenberg’s ersatz Kantian objectivity. We follow a trajectory from early abstraction towards social-activist art, all the while tracking the ways in which the body is always centered, whether implicitly or explicitly. Every class begins guided breathing and light movement, which helps my often harried students arrive and collect their thoughts. Many of them remark that it is one of the few moments of quiet they get during their days; when I myself am distracted and habitually launch into subject matter from a place of worrying about getting through the material, they always remind me of what’s missing.

In this way, we organize the class, together, as a space that creates a more generous space in contrast to the often fierce demands of their studio schedules. Towards the end of the semester, when their critiques are in full swing, we turn towards explicitly body-based activist art of the late 20th century, armed with bell hooks and Audre Lorde, with the hope that they will understand that “self-care as an act self-preservation and political warfare” as relevant not only to the personal and public work of artists such as Faith Ringgold and Felix Gonzalez-Torres but their own art practice and lived experience as producers of culture and knowledge (Lorde, 1988). In this opportunity to work with first-years, I am particularly moved by the potential laying of a foundation for students to contextualize their work in the light of social justice art practice, and to plant seeds that help them care for their bodies and minds as equally crucial elements of theirselves.

In her introduction to text Radical Dharma: Talking Race, Love, and Liberation, the Reverend angel Kyodo williams speaks to the role of meditation in the social justice movement. Citing Ghandi’s now familiar axiom, she argues we can no longer afford to just “be the change,” instead we must transcend the form — “The only way we can do that is to observe the construct that we’re in instead of trying to tinker with it right way with the same blind spots that we came to the problem with.” (Williams, 2016) A crucial part of this is having the time, patience, and learned skill to sit with things and see them as they are, to know the shape of things allows us to engage is more skillful ways. I return to the question of noticing what we choose to center in our attention. In my personal, research, and pedagogical experience when we make room for the body, certainly as sign but also as lens, we make room for myriad intelligences and perspectives.

A second blog on the perils of un-physical education by Elizabeth Maynard here!