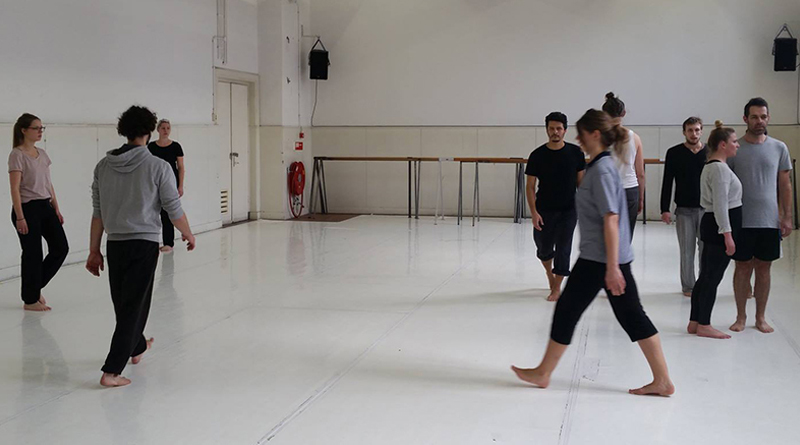 Learning from the body takes time and practice. Even after 35 years of physical training in dance and theatre, I still have to remind myself I have a body. This blog post focuses on the power dynamics that arise when we work with others and how listening to and working with the body can bring awareness and mediate those dynamics.

In the last year, the #metoo movement has brought to light sexual assault and harassment in every field including dance and anthropology. Whether you are someone who does or does not have a lot of power because of your gender or status, it is important to know that these power dynamics exist, are felt, and affect your work. What follows comes from my research on how to create and teach autonomy in a group from the point of view of a dancer and theatre artist. It isn’t a comprehensive plan of action to dismantle oppression, but offers embodied practices to help you recognise your relationship to power.

A year after my studies in classical and contemporary dance ended, I found myself in so much pain I could barely walk. I turned to somatic training including the Alexander technique and yoga and began to learn how to reconnect to my body. When I got back to work I started to become aware of another violence in the social structures of dance companies; feeling controlled by a choreographer telling me what to do with my body.

When I heard the theatre director, Anne Bogart, give a lecture about being careful of the social system that you create during a creative process because the audience can see it in your final performance, I was intrigued and went to study with her. Anne Bogart’s SITI Company works as a collective and has adapted a training called the Viewpoints (originally created by choreographer Mary Overlie). It is designed to quickly bring a new group together through a shared research of the materials of theatre including space, time, shape, and gesture. The training aims to get the ensemble to spend less time talking and more time on their feet making physical choices together and is used as a foundation in creating their social system. It culminates with open improvisations performed for an audience.

For the first year and a half of this training, regardless of the good intentions of egalitarianism, I found myself being dominated by the loudest idea or, as a small woman, picked up by a large man and carried to another part of the space. I felt like I had to give up my own ideas and join the group’s activity whether or not it felt safe to me. Not surprising, I disconnected from the experience of my body to do this.

In an early experience teaching the Viewpoints in Belgium, I witnessed this from the outside. During one of the final improvisations, a group of actors and directors started to grab and even hit each other. I stopped them and learned they were desperate to create something new and groundbreaking in the last moments of the workshop for the audience, thus resorting to violence. My research question became clear, could being present with the body’s experience facilitate autonomy and care while working with others?

Taking what I learned from the field of somatics and bringing it into my classes, I started to research this question. The results were inconsistent. Often the students discarded the somatic and reverted to being results-oriented, controlling others or being controlled. On the other end of the spectrum, everyone looked as if they were in personal warm-ups, completely ignoring one another. 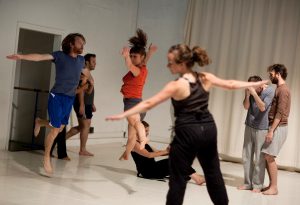 My next experiment was to overload them with tasks. I would give an assignment to study the space, move in a particular way with a certain timing, create a specific story about how to relate to the other performers, and tell a monologue at a certain volume all at the same time. I gave them so much to think about and work on they couldn’t fall into the traps of entertainment or controlling the outcome. This resulted in everyone looking more present and alive, however it was a temporary fix. If I opened up the improvisations again to their choices, the old habits would return.

The SITI company was also trying to solve this problem and in trainings with them, I was invited to walk away from the others to see what that felt like. We actively ignored one another and followed only our impulses. In one class, we got to yell “stop” anytime we felt controlled by another person. I found this empowering, but it brought up the question of whether we were creating greater separation between us rather than working together. It also felt disembodied and offered only tools for the person being oppressed, not the person who might be attempting to control.

I received insight when I studied with the originator of the Viewpoints, Mary Overlie. Although her practice was threaded through The SITI Company’s approach and my own research, she confirmed my theory of using the body as a starting point for group work. We spent hours organising ourselves through movement sequences designed to wake up every muscle. We spent even more hours bringing our whole bodies and our senses to each one of the materials of theatre (space, time, movement, shape, emotion, and story).

After several days of this slow, patient, individual work, we ended with group improvisations. We were told to continue to focus on our own research, and if other people joined us we were to act simultaneously as a participant and an observer. Mary told us we would experience influence from others, but to continue practicing a connection to ourselves. She referred to this as a dialogue across differences. 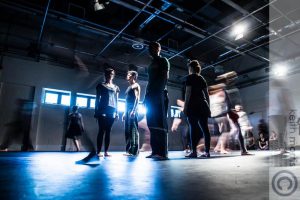 The result was extraordinary. From onstage, I felt like I was finally inhabiting the social system I had been desiring where there was both consent and connection. I felt trust to work together and freedom to walk away. I felt porous, connected, and aware of myself, the others, and the audience. When watching, I could see each practitioner present, alive, and engaged with their own work. I saw unforced connections spring up and dissipate.

In the “guided practice” section of the Somatics Toolkit you will find two audio tracks by me: one to learn how to work with space and your gaze individually and one for working in a group. The individual practice will get you anchored into a physical practice in space, while the group practice offers tools for working together, recognising conflict, and your own relationship to power.

Much like learning from the body, changing or creating a social system that you desire takes time and attention. This is because power dynamics are often invisibly entrenched and normalised. You might find yourself struggling with competition and unrealistic deadlines that affect your well-being and others around you, exacerbating this unbalanced power. Slow down. Take a deep breath. Keep coming back to the body as a starting point. The quality of your research and work with others will raise and create a ripple effect that everyone in your process can feel.

Spatial awareness and gaze: working with others as participant and observer.